Come view the show in person, at the Gallery, we’re open Mon-Sat 10am-4pm and Sun 12pm-4pm no admission fee and no reservation required. 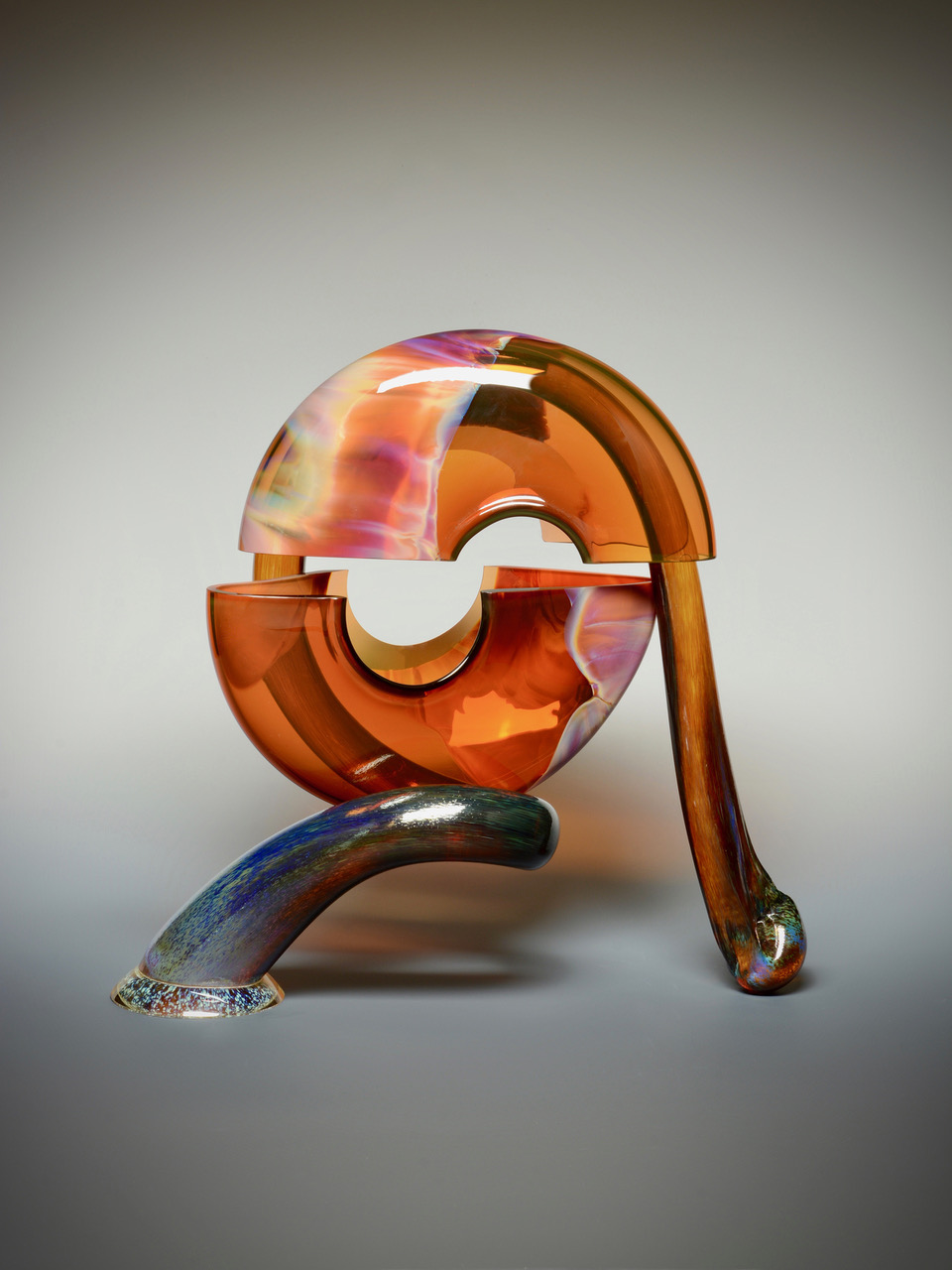 Was born in Washington, D.C. in 1959 and comes from a family of artists, starting with her Great-Grandfather, Frank Graham Holmes, former Chief Designer of Lennox China. In 1977 Elodie studied Ceramics at Montgomery College in Rockville, Maryland. In 1979, Elodie attended California College of the Arts in Oakland majoring in glass and ceramics. It was there she met her teacher, Marvin Lipovsky and eventually worked for him in his polishing shop. In 1981, Elodie relocated to Santa Fe, New Mexico to help run a glass shop on Canyon Road- the art center of Santa Fe. It was there that her initial passion for ceramics gave way to hot glass.  In 1984, Elodie went to Pilchuck School in Seattle as a teaching assistant to Marvin Lipovsky and Fritz Dreisbach. The following year, on her way back to Pilchuck on a scholarship, she was in a near fatal car accident and Elodie did not know if she would ever be able to blow glass again. Inspired by the suggestion from a glass blowing friend, she took up flame-worked glass, which inevitably helped to rehabilitate her severely broken limbs. In 1987 Elodie established Liquid Light Glass. After 9 years of flame-working, She started blowing glass at Peter VanderLaan’s studio, Glory Hole Glass, where Peter introduced Elodie to making glass colors. In 1997, Elodie was one of several artists to create a unique Christmas tree ornament for the Clinton White House. That same year, she also was part of an exhibit,  ‘A Continuing Tradition’, at the Trenton City Museum in New Jersey, featuring the family’s art of Graham Holmes, Elodie Holmes and Stephen Holmes. In the fall of 2000 Elodie finally was able to build her own glass studio. 2002 brought her first museum show at the Museum of the Southwest in Midland, Texas. In 2003, Elodie started collaborating with Jannine Cabossel creating large glass art together. Elodie continues to run her studio and gallery, Liquid Light Glass and her solo work is featured in many galleries throughout the U.S. Elodie and Jannine’s collaborative work can be seen at Jane Sauer Gallery in Santa Fe, NM. In addition to making glass art, Elodie is very active teaching private classes, doing public demos, partnering in another glass shop, being an active member of Glass Alliance-New Mexico, and is an influential figure in the Santa Fe artistic community.

have always felt that, even though we are all meeting up with each other and interacting in twos or threes or crowds, each of us is essentially alone. That brings up a bit of melancholy but it also makes the individual unique and therefore very important.

I started working in glass simply because it is a very seductive material. I have chosen to focus on sculpting figures. What interests me most is trying to convey the intellectual and emotional state of the individuals in my pieces, relying on subtle gestures, a turn of the head or twist of the hips, to express the figure’s state of mind. For a long time I was paring down the environment of the figures to simple geometric forms.  Most recently I am working on softening those forms yet keeping them simple and obvious. Refining the figure has absorbed much of my time. Throughout the years, I have tackled the technical challenges of increasingly larger work.  The increased scale allows for more nuance of expression in each sculpture.

I have also cast figures in bronze.  The contrast between the metal and glass is fascinating, but I believe that I will always revere glass with a sense of wonder. It holds the light, like the soul. 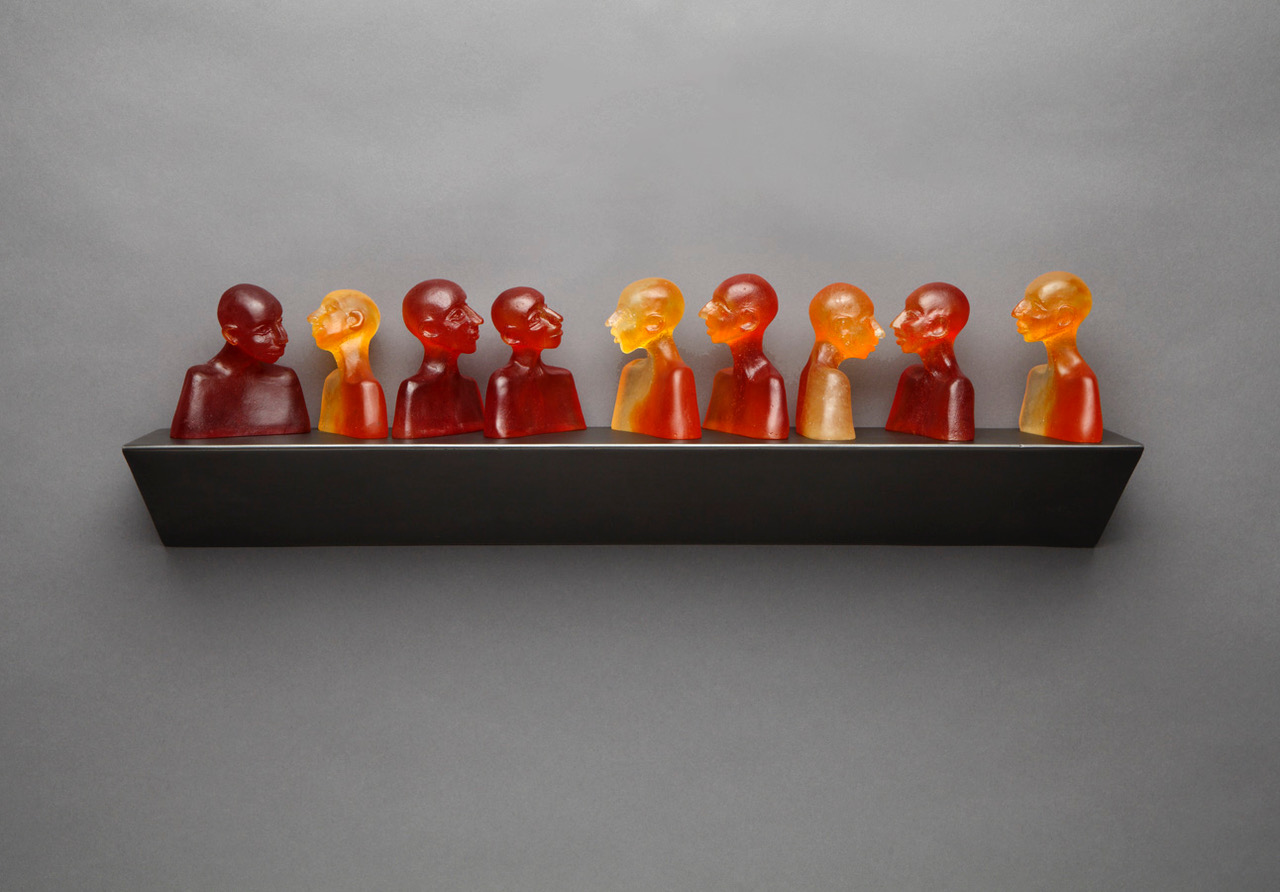 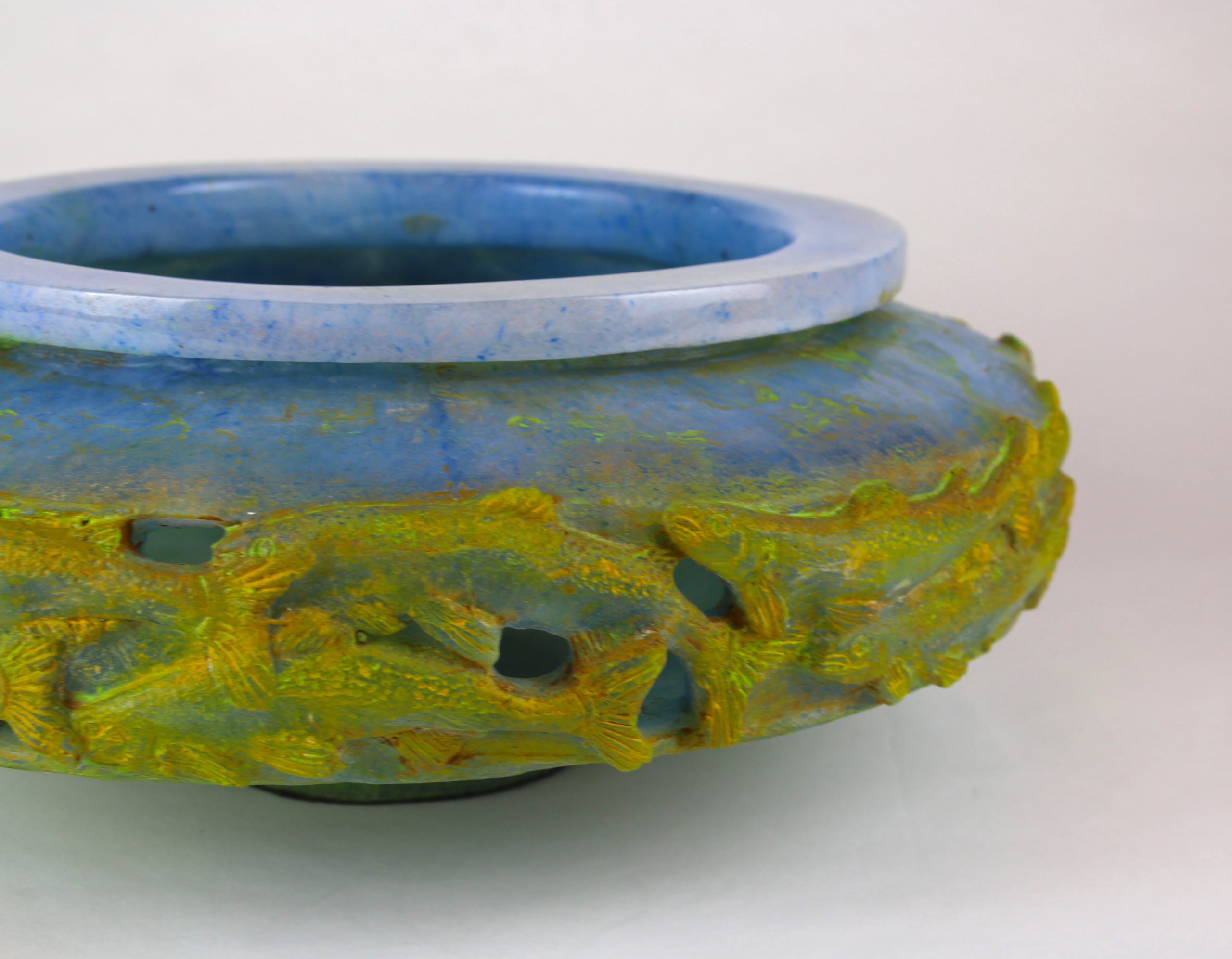 Began his career as a glass artist in 1974. The following year he purchased land in rural New Mexico that had been part of an artist commune in the 1960s. By 1990, the complex evolved into a hot glass and casting facility and, a school with an apprentice program affording studio and gallery space for Charles and seven other glass artists as well. In 1990 he had the opportunity to refine his skills under David Reekie and Clifford Rainey at the prestigious Pilchuck Glass School in Stanwood, Washington. Initially, he focused on glass blowing techniques with a strong basis in functionality. In the late 90s, Charles began casting sculptural pieces. It is his goal to create a

“body of work that is visually pleasing on both the interior and exterior, but that still holds a certain utilitarian feeling.”

The entire lost wax glass casting process takes over three months to complete. The castings are 24% lead crystal which gives them a unique texture often resembling stone, while retaining the wonderful translucent qualities of glass.

“Pescador” is an exquisite example of Charles’ skill and design aesthetics. It is a classic form with a beautiful, jade-like patina. The ornate carving featuring swimming fish which form an open, intricate design, is reminiscent of ancient Asian stone carvings in its level of detail and beauty.

After twenty years in commercial construction, beginning in Vail and ending in Chicago, Peter Wright says, “I began to seek alternatives for the second half of my life.” In 1994, his life-long interest in art led him to found Wright Publishing Company. In this endeavor, Wright partners with artists to produce and market limited edition fine art; primarily bronze sculptures. The artists work in many media, including clay, wood, and stone, which Wright re-produces in bronze.

In 2000, renowned glass sculptor William Morris joined this group of artists and Wright was introduced to the world of art glass at the highest level. He spent countless hours watching hot glass being shaped into amazing forms. Ultimately, he realized that the best way to truly understand glass was to learn to work with it himself. He was “completely drawn in and seduced by hot glass” and that same year he began studying at Pilchuck Glass School in Washington. 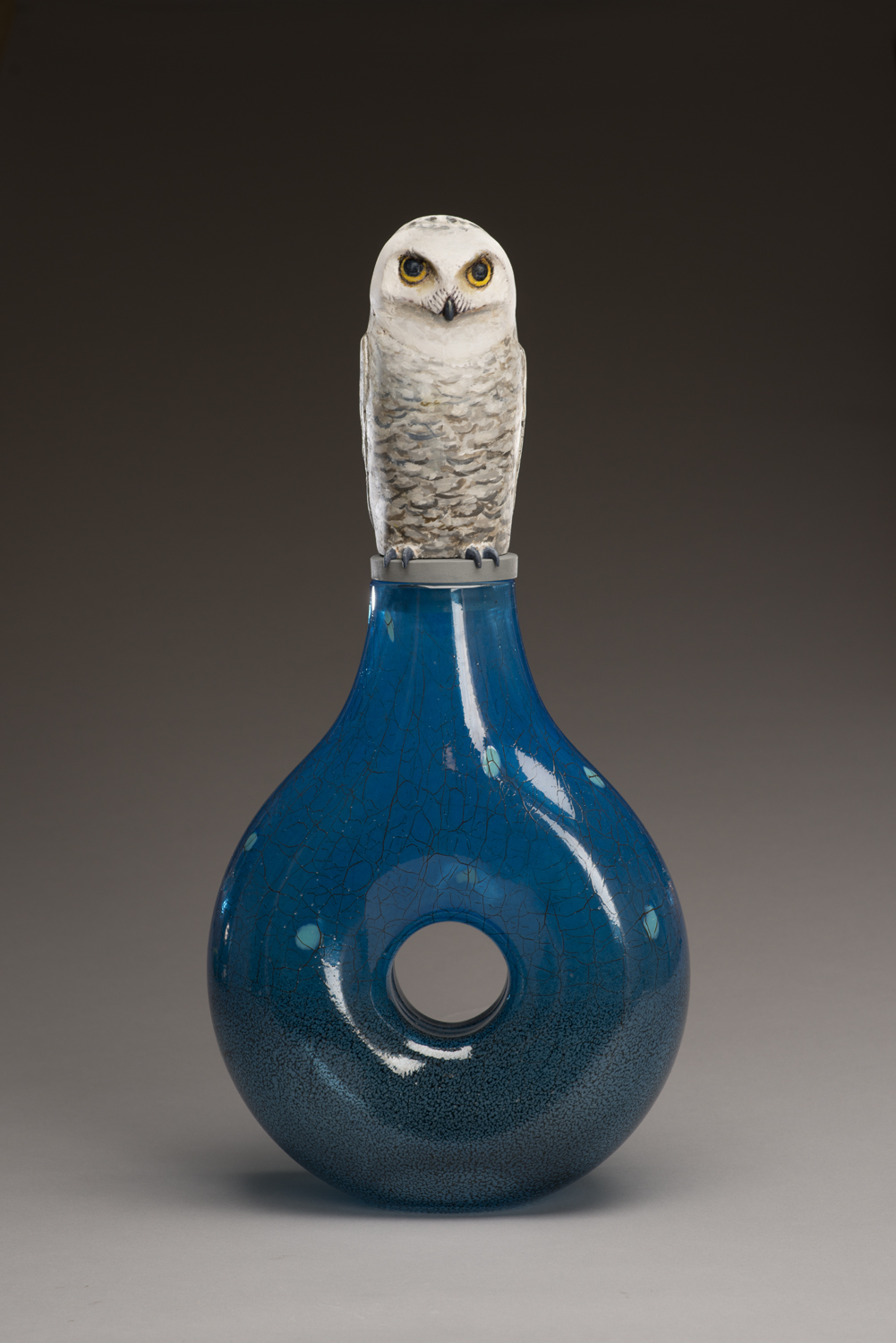 meet each artist featured in this fantastic show