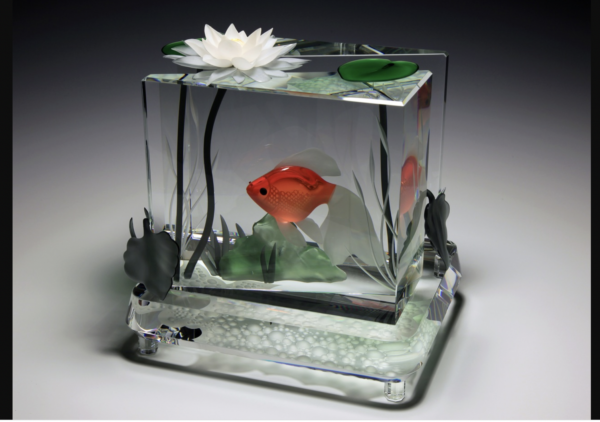 In 1966, Jan first attended crystal cutting school in his home country of Poland, a career was born. After six grueling years and after exhaustive testing, Jan obtained the degree of “Master Cutter”. For the next few years Jan excelled as a production manager for a private crystal company where he also served as a master cutter, teacher and instructor. For most, this level of achievement is what one works for all their life. For Jan, benchmarks have always been meant to be surpassed, limits broken, and status quo thrown to the wayside. In Jan’s mind, settling has never been an option – his journey was only just beginning.
At this point in his life, Jan’s soul yearned not only for Artistic, but personal freedom as well.
On December 1st 1981, Jan, along with his wife Krystyna and his not yet 3 year old son, fled Poland, a then communist country, just 13 days before Martial Law was passed. During this escape to freedom, Jan and his family spent 14 days in an immigration camp pleading for asylum. The constant fear of separation and prosecution always loomed overhead. Many times the thought of giving up and returning to Poland crossed their minds, but they had to trade their return tickets along with their passports for insider assistance, which made turning back impossible. After days of being interrogated, isolated and thoroughly exhausted Jan and his new family were finally accepted as political refugees and were transported to an immigration camp in the Alps. It was only at this point that Jan felt as if life could be good again. The friends that were met along way were invaluable in helping them weather the waiting period, which took over 6 months, in order to secure visas for entry into The United States.
On April 15th, 1982, Jan first stepped foot onto his new homeland. The joy of having already come so far was quickly tempered with the reality that all their belongings fit in a single suitcase, with less than $50 in their pockets, Jan had to quickly figure out a way to survive. With the help of his brother in law, he took any job he could find to provide for his family’s needs, at some points juggling up to three jobs at a time, all the while looking for the opportunity to reveal his gift to the US. Working as a maintenance super for an apartment complex as well as a painter, Jan finally found an opportunity to work with crystal on the weekends. In order to work as a crystal cutter at that time, Jan had to acquire, build and maintain his own equipment. With the aid of Doug Merritt, Jan finally found an avenue for expression at Vandermark-Merritt studio, and like the flower sculptures that Jan captures so masterfully in crystal; Jan’s career was beginning to bloom.
In 1984, Jan’s work and dedication gained the attention of Lennox Crystal and Jan was invited to join the firm and become a master cutter with them. While at Lenox Crystal, Jan’s work continued to impress and awe all those who witnessed it. In 1988 Jan was hand selected from all other cutters in the company, and also the country, to execute a special design commissioned by the United States Congress to be presented to George H.W. Bush during his inauguration ceremony in 1989. This piece and its artist now gained national recognition, and on January 20th 1989, Jan was honored as Person of The Week on ABC News with Peter Jennings. This event was publicized throughout the US and Europe.
The fruits of all his work and the risks taken were now starting to take shape and the decisions that were made were finally beginning to pay off. The once dream of being able to live and work in an environment of freedom of expression were now a reality. Still, with the accolades and success up to that point, Jan’s gifts could no longer be bound within the limits of Lenox Crystal. The need to create works of art that, until then, only his soul could envision were now too strong to ignore.
In 1992, Jan finally took the leap that only true freedom could bring and created his company, J.L. Crystal Artistry. Fully embodying the American Dream, Jan was now able to determine his own future and since then the crystal world has never been the same. Now, those same companies Jan had previously worked for approach him for private commissions including the Inauguration of President Bill Clinton in 1993. To this day, the list of dignitaries and heads of state that own pieces of Jan’s work continually grow and even include the late Pope John Paul II.
Daily, Jan takes the limits and challenges presented by his medium, and shatters them; creating Fluidity out of Rigidity, Life out of Unanimity and offers viewers a brief glimpse into his mind’s eye. He is proud to share with us his gift, which he describes as, “never work, I am fortunate to be passionate about my art, and I look forward to the next day and the surprises and discoveries that I encounter.” It is this passion for his art and his joy of creation that Jan hopes to pass on to his viewers.
Bob Proctor, a self-made millionaire, and success trainer once said “We come this way but once. We can either tiptoe through life and hope we get to death without being too badly bruised or we can live a full, complete life achieving our goals and realizing our wildest dreams.” It is because of Jan’s passion for life and his ongoing quest to realize his dreams that we are able to experience the pieces that we see today. Jan is living his dream. Come join him.