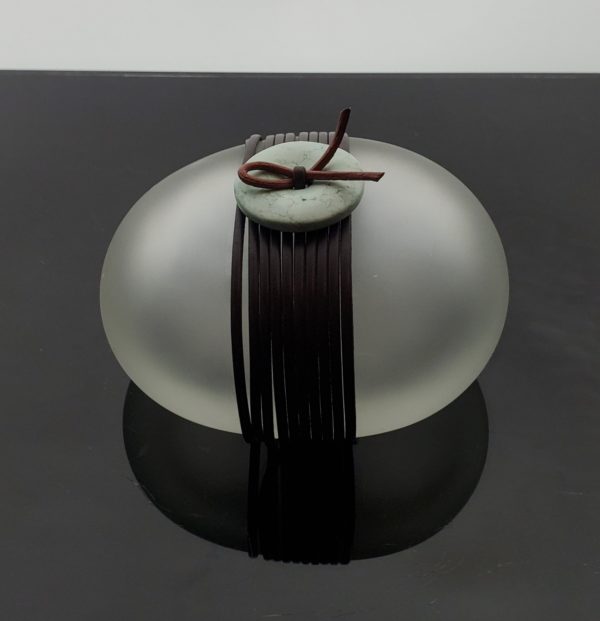 The purpose of these hand-blown glass “Serenity Moments Rocks” was to create an object that could feel contemplative when viewed, or simply admired for the serene quality of the object. These designs are usually based on a simple repetitive technique, that with patience and time combine to create something aesthetically pleasing that may be used asa focus for quiet contemplation, meditation, or simply admired for what it is.

Dimensions:
2h x 4w x 4d in
5.08h x 10.16w x 10.16d cm
Category: Willi Haye
Willi purchased her first piece of glass at age 17 while traveling around Europe before starting college. She barely had enough money to get by, but found a piece of glass in Murano, Italy that she bought anyway as she was so intrigued by the colors and light. She had no idea that someday the shining, gleaming luster of glass would become a great passion of hers.  Willi lived her formative years in the Netherlands immersed in the art of her abstract artist parents and their artist colleagues who were also mainly interested in abstract art. On a funny note, her father was so influenced by the art of Wassily Kandinsky and spoke so much about him, she grew up as a little girl thinking he was her uncle. Some uncle!

Through her work in kiln casting, this Santa Fe based artist explores color, form and design.   Although she was a registered nurse by profession, she spent 2 decades involved in photography while raising her family.  The move to the creation of objects that required a hands on involvement upon her move to Santa Fe, New Mexico  was a life changing event that opened up a new world. Since that time, she has been creating sculptural objects in steel, wood, bronze,  and for the last 17 years, kiln cast glass,
This has required an endless related series of experiments which she continues to engage in today as she pursues this avenue of expression.

Her art comes from within, but it is also the result of a variety of life experiences and outside influences. Her work is heavily influenced by spending time in 2016 with glass master Petr Stacho at the Secondary School of Glass making in Kamenicky Senov, Czech Republic, the oldest glass school in the world. Her abstract sculptures may appear simple at first glance, but on closer inspection, often reveal an alternate space within the glass.  ​