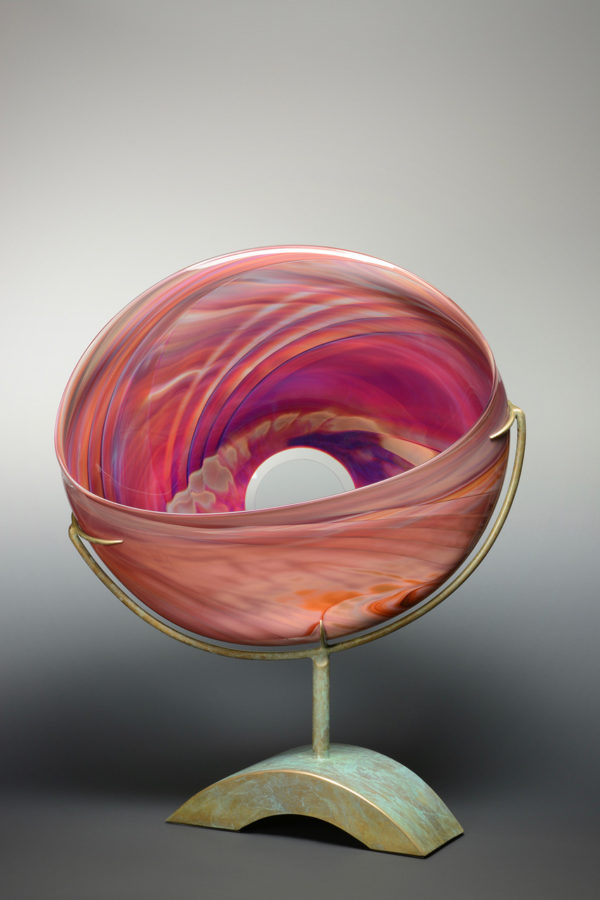 Blown Glass with Bronze Base

Elodie Holmes was born in Washington, D.C. in 1959 and comes from a family of artists, starting with her Great-Grandfather, Frank Graham Holmes, former Chief Designer of Lennox China. In 1977 Elodie studied Ceramics at Montgomery College in Rockville, Maryland. In 1979, Elodie attended California College of the Arts in Oakland majoring in glass and ceramics. It was there she met her teacher, Marvin Lipovsky and eventually worked for him in his polishing shop. In 1981, Elodie relocated to Santa Fe, New Mexico to help run a glass shop on Canyon Road- the art center of Santa Fe. It was there that her initial passion for ceramics gave way to hot glass.  In 1984, Elodie went to Pilchuck School in Seattle as a teaching assistant to Marvin Lipovsky and Fritz Dreisbach. The following year, on her way back to Pilchuck on a scholarship, she was in a near fatal car accident and Elodie did not know if she would ever be able to blow glass again. Inspired by the suggestion from a glass blowing friend, she took up flame-worked glass, which inevitably helped to rehabilitate her severely broken limbs. In 1987 Elodie established Liquid Light Glass. After 9 years of flame-working, She started blowing glass at Peter VanderLaan’s studio, Glory Hole Glass, where Peter introduced Elodie to making glass colors. In 1997, Elodie was one of several artists to create a unique Christmas tree ornament for the Clinton White House. That same year, she also was part of an exhibit,  ‘A Continuing Tradition’, at the Trenton City Museum in New Jersey, featuring the family’s art of Graham Holmes, Elodie Holmes and Stephen Holmes. In the fall of 2000 Elodie finally was able to build her own glass studio. 2002 brought her first museum show at the Museum of the Southwest in Midland, Texas. In 2003, Elodie started collaborating with Jannine Cabossel creating large glass art together. Elodie continues to run her studio and gallery, Liquid Light Glass and her solo work is featured in many galleries throughout the U.S. Elodie and Jannine’s collaborative work can be seen at Jane Sauer Gallery in Santa Fe, NM. In addition to making glass art, Elodie is very active teaching private classes, doing public demos, partnering in another glass shop, being an active member of Glass Alliance-New Mexico, and is an influential figure in the Santa Fe artistic community.

On her work, Elodie states, “The act of discovery is an accident meeting a prepared mind, and an experienced hand and intuition play an important role in creating my art. My work is loosely inspired by classical forms, and forms in nature, but also by the glass itself. The spontaneity and tension created in each piece of art off the end of a blow pipe is highly satisfying. It’s a dance,’’ Holmes says of the physically taxing work, “The fire sets the tempo – and glass is the music.”