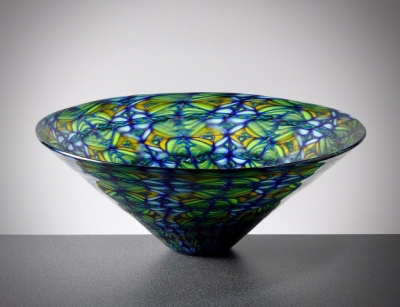 Sam Stang was born in Northfield, Minnesota in 1959. He attended Washington University in St. Louis, Missouri from 1980 to 84 and was a student of Fritz Dreisbach at Penland School of Crafts in 1983. He was also a student of Lino Tagliapietra at Haystack Mountain School of Crafts in Maine. Sam was a founding partner in Ibex Glass Studio (1985 through 1991) and started Augusta Glass Studio in Augusta Missouri in 1992 which he still operates as a sole proprietorship.

All of my pieces are made by using traditional European glassblowing techniques. With the murrini pieces, I begin by making glass rods which are patterned in cross section. The rods are cooled and cut into thin pieces and arranged on an iron plate which is then heated to fuse the murrini. This is then rolled into a tube on the end of a blowpipe and shaped into the final form.

Every piece I make is entirely produced hot at the furnace. The banded bowls are blown as separate sections and fused together. This technique, known as incalmo, requires a great deal of skill and cooperation. I work with at least one assistant and often with a team of three experienced glassblowers.