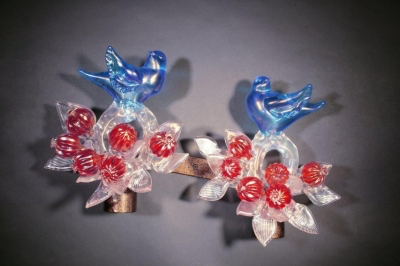 14h x 23.50w x 8.50d in
35.56h x 59.69w x 21.59d cm
Category: Richard Jolley
Richard Jolley was born in Wichita, Kansas in 1952 and then moved in his youth to Oak Ridge, Tennessee. In 1970, the artist began his studies at Tusculum College in Greenville, Tennessee, studying glass under Michael Taylor. Taylor was then invited to create his next program at George Peabody College in Nashville (now a part of Vanderbilt University) where Jolley later completed his B.F.A. In the fall of that year, Jolley further polished his technique at Penland School of Crafts in North Carolina under the instruction of Richard Ritter. Jolley continues this teaching tradition by frequently returning to Penland and through unique programs designed to involve at-risk students in the Knoxville community with professional working artists.
Building and maintaining a glass studio in Knoxville since 1975, Richard Jolley has participated in over 65 solo museum and gallery exhibitions throughout the country as well as Europe and Japan. Early in his career, Jolley had been included in some of the most important glass exhibitions at the Hokkaido Museum of Modern Art, Sapporro, Japan, and the International Exhibition Glass in Kanazawa, Japan, as well as Grounds for Sculpture in New Jersey and Laumier Sculpture Park in Missouri. Over the next decade the artist continued to be included in important museum exhibitions surveying contemporary glass and sculpture such as the Indianapolis Museum of Art, Museum of Fine Art, Boston, Renwick Gallery of the Smithsonian American Art Museum, and the Carnegie Museum of Art and most recently in the Wornick Collection exhibited at the Museum of Fine Art, Boston. After numerous solo exhibitions Mark R. Leach of the Mint Museum of Art in Charlotte, North Carolina, organized the first cohesive exhibition of Jolley’s mature glass sculpture works in 1997. Then in 2002 Richard Guber, then Director of the Ogden Museum of Southern Art and Stephen Wicks, Curator of the Knoxville Museum of Art, organized the artist’s first major retrospective exhibition that traveled to 14 museums in the US over five years. Richard Jolley’s extensive body of work along with the glass work of Tommie Rush, his wife, will be re-examined by the Mobile Museum of Art in April of 2011.
Since 1973, the artists’ work has been extensively collected both privately and by public institutions. Found in over 33 public collections, notable establishments including the Carnegie Museum of Art, Corning Museum of Glass, Knoxville Museum of Art, Los Angeles County Museum of Modern Art, Museum of Fine Arts, Boston, Renwick Gallery of the Smithsonian American Art Museum, Washington, DC, and the Frederick Weisman Art Foundation in Los Angeles.
Richard Jolley has additionally been honored for his art through a variety of awards, commissions, and invitational workshops in Tennessee and abroad. In 2007 Jolley was the youngest visual artist to ever receive the Tennessee “Governor’s Distinguished Artist Award” and acknowledged with the 2010 “Individual for Outstanding Accomplishment in the Field” by the Art Alliance for Contemporary Glass. In 1998, the Tennessee Arts Commission selected the artist to participate in a Tennessee/ Israeli Cultural Artist Exchange, and in 2009 started exhibiting his work at the Litvak Gallery, Tel Aviv, Israel. Then in 2011 the artist was invited to complete a new series of art at the Berengo Studio, Murano, Italy, and will exhibit the work at Venice Project, Venice, Italy, in May of 2011.
Richard Jolley has received several private and public commissions including “Absolut Statehood: Tennessee” 1993 national ad campaign for Absolut Vodka followed by the creation of a custom martini glass for Bombay Sapphire Gin international ad campaign. Current prominent sculpture commissions include “Everything and the Cosmos” (2007) installed in the Seven World Trade Center, New York City and the forthcoming largest glass installation at the Knoxville Museum of Art to be completed in 2013.
Statehood: Tennessee 1993 national ad campaign for Absolut Vodka followed by the creation of a custom martini glass for Bombay Sapphire Gin international ad campaign.

Current prominent sculpture commissions include “Everything and the Cosmos” (2007) installed in the Seven World Trade Center, New York City and the forthcoming largest glass installation at the Knoxville Museum of Art to be completed in 2013.